The FCE is a mythical railway line in the true sense of the word! After a trip on this railway, you will have a captivating and incredible story to tell: the rails, the wagons, the people, the landscapes... There is only one train left and only first-class passengers sit down! Your trip has never been that unforgettable!

An old railway line that has come a long way

The Fianarantsoa - East Coast railway dates back to colonial times and has never been renovated. The rails date from 1889 and come from the Krupp steelworks (Germany), taken from an Alsatian railway line at the end of the First World War. And the wagons come from Switzerland!

The construction lasted 10 years, from 1926 to 1936, and opened up the east of the country in order to promote the exportation of Malagasy agricultural products to Europe. The aim was to connect Manakara to the port of Toamasina: Manakara-Fianarantsoa by train and Fianarantsoa-Antananarivo-Toamasina by road.

The FCE is 163 km of railway track, 18 stations, 48 tunnels (the longest of which is 1,072 m long), 67 bridges, 4 large viaducts and... an airport! Indeed, the line passes through the Manakara airport’s runway. The route from the east coast (Manakara) to Fianarantsoa has an altitude difference of 1,200 m with a slope of up to 3.66%, one of the steepest in the world.

It should be noted that the FCE is truly strategic for the region. It is even vital for about 200,000 farmers. Villages isolated in the emerald forest would be totally cut off from the world without this line. These farmers would have no way of transporting their products and food.

As there is only one train that is railworthy, the line provides only two round trips per week. A trip requires about 300 L of diesel fuel and lasts between 12 and 18 hours! At the station, farmers rush to the wagons to pile up their goods: nearly 400 passengers and 200 tons of loads! No wonder the average speed is 20 km/h!

However, this gives travelers (especially tourists) time to admire the landscape: steep cliffs, hills dotted with banana trees, jackfruit trees, mango trees and ravinala (the emblematic tree of Madagascar), rice fields, waterfalls... These magnificent landscapes of greenery and water are accompanied by a sweet fruity aroma. Whether inside or outside, fruit is omnipresent!

·         Sahasinaka (PK 114) along which the hills gradually bare, meaning the train is approaching the sea and Manakara

There are 18 stations, but sometimes there are many more stops due to the cars left in disrepair, the very poorly conditioned rails and the difficult route. Either it's a mechanical problem or it's a track problem. Railway workers and passengers are anxious all along the journey, always expecting mechanical problems, especially braking when descending a slope.

Cyclones only aggravate matters and those of 2000 in particular left significant damage, including 280 landslides along the track. During the rainy and cyclonic seasons, tree trunks can block the track. Railway workers and passengers can take hours to clear them out of the way. 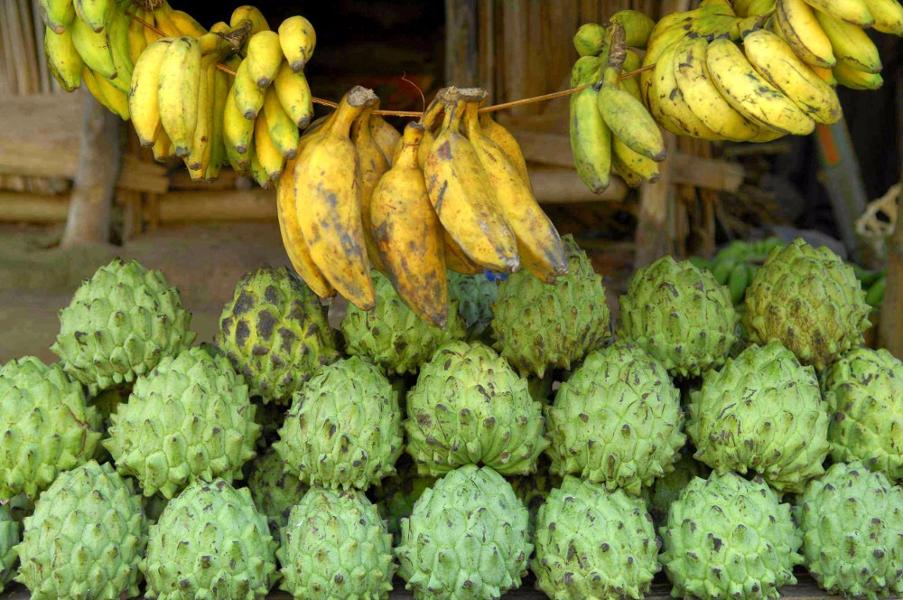 Tourism
Related articles
Rice/fish farming in Madagascar: a practice that should become a reference
Ambila: a green village between the Pangalanes Canal and the Indian Ocean
Nosy Iranja: a beautiful secret island recommended by Vogue magazine among 9 other islands
Whale shark, rays, whale, turtles, dolphins ... The exceptional is in Nosy Be
Talk to Tolo, National Guide to Detours Madagascar
Archives
Tags
Tourism (11)Flora and Fauna (7)People and Ethnicities (5)News (2)Culture and Tradition (1)Gastronomy (1)Society (1)